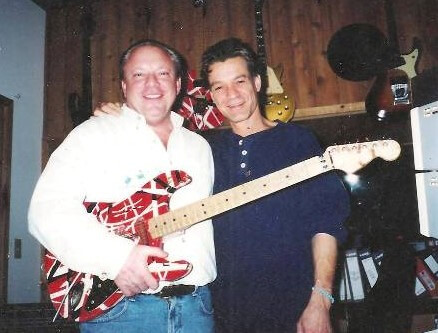 I was sitting here working on a blog about my cousin Jerry Heller whose birthday it is today, he would have been 78 years old.  And then I heard the news about Eddie Van Halen dying.  Incredibly sad.

I met Eddie while coaching my 8-year-old son David’s Sherman Oaks AYSO soccer team in 2000, his son Wolfie was one of my players.  Eddie and Valerie Bettinelli offered to be the team sponsors and were genuinely nice, very gracious and very cool.

Wolfie was not much of an athlete, he was a little heavy, had hair down to his shoulders, was a little bored and was the son of one of the greatest guitar players that ever lived. (I’m crying now.)

Valerie & Eddie came to a lot of the games and were always friendly. Wolfie got better and better and turned into an excellent goalie.  They graciously let us use their giant house in the Hollywood Hills for our season end party, and if my memory serves me right, they had a permanent roller coaster in the backyard. Of course, the food was great, and Eddie took me to his studio 5150 to see where he made his magic.

He showed me his red & white striped guitar and I had him autograph one of my guitars.  He was so nice and normal. Eddie had tongue cancer during these days.   I read somewhere he got it from putting steel guitar pics in his mouth, I do not know if that was true or not.

I saw Van Halen at the Starwood once and could barely get in the front door.  The volume was ear splitting. They were the first Heavy Metal group out of LA in the 80’s to become and stay massive.

In the mid-80s I was managing a local LA Heavy Metal band called Hurricane and we played up and down the Sunset Strip until we finally got a record deal. We played at Gazzari’s, The Roxy, The Whiskey, The Country Club, Madam Wong’s and finally toured the US four or five times.  Hurricane loved Van Halen and that was what we (and all the other bands in town) wanted to be.

Years later I got a call from my friend Harvey “Animal” Stephenson who used to be the bodyguard for Eazy E & NWA when I worked at Ruthless Records.  He was now the bodyguard for David Lee Roth.  Van Halen got back together, and he invited me to the family & friends only preshow warm up gig at Staple Center before their tour started.

At that point Wolfie, my goalie, was the bass player. They fucking rocked.