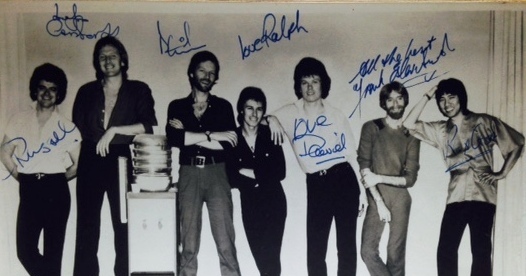 Sometime in 1978 or 1979 I was playing managing a rehearsal studio called Big Ed Productions and performing in a  seafood restaurant in Northridge, Ca.  I got a call from the first African American I ever became friendly with in junior high school, Robert “Tico Bob” Street.  We used to be the first ones to show up at Eastmoor Jr. High and we became good friends for many years, and we still keep in touch. As the story goes, he was a limo driver in Atlanta and he picked up a group called The Knack. At that time they had the number one song in the nation “My Sharona” and had the number one album in the country…Meet The Knack.

Apparently he was a little drunk and had an accident in the limo, driving the lead singer Doug Fieger and the manager.  Well only in America, they liked Bob so much they hired him that night as Head of Security.  Tico Bob was a big menacing looking guy but he was a very nice, personable gentleman.  He called me in Los Angeles and asked me if I knew who they were and if I thought he should take the job. I said Hell Yea.

He did the tour with The Knack which was very successful and he moved to LA where we shared an apartment with another member of the crew, Jeff Conroy.  He also got to be very good friends with the bands agent from William Morris, Bob Ring, who was the major rock agent in the country at that time.  Bob Ring was going through a very bad divorce and Tico Bob consoled him and basically saved him from committing suicide.

Tico Bob moved back to Atlanta and I didn’t hear from him for maybe a year.  I then get another call from him in 1980 and he asked me if I knew who Air Supply was. I was performing two of their songs in various clubs in LA and I really liked the group. He told me Bob Ring offered him the Road Manager job for air supply, which was huge. He wanted me to come out as production manager which I knew a little bit about, but I was never on the road before at this scale. Three semi’s full of equipment and 3 buses of band and crew.  (To Be Continued…..)